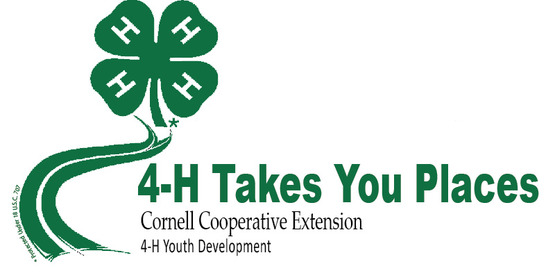 4-H is a worldwide youth development program available in every state and over eighty countries. It is open to all youth aged 5-to-19, who want to have fun, learn new skills, and explore the world.  In return, youth who participate in 4-H find a supportive environment and opportunities for hands-on or "experiential" learning about things that interest them.  They also get what all young people need to succeed in life--the confidence, compassion and connections with caring adults to make contributions to their communities.  The mission of Cornell Cooperative Extension 4-H Youth Development is to unleash the power of youth and adults through diverse opportunities that meet community needs.

Healthy Lifestyles - "Choose Health" is an initiative of the Cornell Cooperative Extension 4-H Youth Development Program intended to help all of us confront and take action to change the statistics of childhood obesity.  This link includes project resources, promotional materials, and more!

Science, Engineering and Technology- Kids who participate in science activities outside of the classroom are more likely to be comfortable with science.  This link takes you to numerous  4-H Science, Technology, Engineering and Math (STEM) projects that give families science enrichment opportunities and connect kids to Cornell’s science outreach programs.

Find out more about the history of 4-H and what it can offer you by visiting the other pages on this site, then get in touch with a local 4-H staff person today!  We're looking forward to welcoming you to 4-H in our county!

History of 20 years of 4-H club work in Cortland County. It is difficult to trace accurately all events leading up to the organization of the work , however with help of many who watched it grown, a sincere effort has been made to gather information and should be there inaccuracies or valuable information ommitted the 4-H office would be glad to know it.

Although 4-H work was formally organized in Cortland County on April 1, 1928 there was considerable youth work prior to that date.

As early at 1918, a canning club was formed near Marathon to teach girls better methods of homemaking. The leader of this club was Miss Mae Reagan, now Mrs. MJ Phalen. Among the members of this club was Leotta VanGorder, Leona DeLilah, Hilda Reagan, Magdelene Reed, Mary Barry, Ruth Harris, Marcena Cater, Arlene Wightman, Edna Rundell and Grace Hollenbeck. In the fall of 1925, another club was formed in Texas Valley with Mrs. LE Harvey as leader. Members included Ruth Harvey, Helen Miller, Edna Lindgren, Mildred Knickerbocker, Lois brown. The following summer, the girls were helped in canning by Miss Krebs, homemaking teacher in the New High School at Marathon.

About 1925, a girls club in Truxton, led by Mrs. Charles Moore, was sponsored by the Home Bureau, Which later became a mixed club. At this time among the early 4-H members were Marian Potter of Truxton and Betty Jones of the Scott Road who were receiving their project helps directly from Cornell University.

In 1926, L.E. Harvey started junior project work in connection with the Marathon school as did Mr. Paul Orvis in Homer. Among the first boys i the Homer club were Harold Buchanan, Rutherford Bell, Olin Spencer and Leslie Thomas who had the first champion purebred show by a Junior at the Junior Show in Cortland (1927) and later won at the State Fair in Syracuse. Winning at Syracuse earned for him the privilege of representing New York State at the National Dairy show held that year in Memphis, Tennessee. Paul Hartquist represented the New York State in the Dairy Judging Contest as an alternated on the State Dairy Team.

Also in 1927 a club was organized on Scott Road with Mrs. Harry hall as leader. In this club were Lois & Lawrence Perry, Franklin Webster, Roland Wilson, Wendell Baldwin, Norma Reynolds Robbins, and others. They later merged in a club in the Homer Jones School District with Mrs. Eva Blanchard as leader. Miss Charlotte Keep was later a long-time leader of this club. These groups and perhaps others were going prior to the formal organization of the work in 1928.

Apparently through the efforts of the aforementioned youth leaders and other interested adults a great deal of interest aroused during 1927, in formally organizing Junior Project Work.

The support from the Board of Supervisors has continued each year to the present time, with $8,000 appropriated for 1948. To guide Junior Project program, a committee of interested person has also way served an an advisory group.

The Junior Project (now 4-H Club work) soon became a natural with rural and village boys & girls. It received a good start with Mr. Henderson in 1928 for 376 boys and 269 girls were enrolled in 25 clubs with 42 leaders.

Some outstanding events for remembering with Alumni 4-H'ers were:

The foundation of the 4-H community lies within the 106 land-grant universities across the country that deliver research driven programs through Extension agents in each of more than 3,000 counties. The 4-H leadership builds on the strength of our state and local professionals in partnership with the National 4-H Headquarters.

Camp committee chairmen have been Asher Goodale, Leland Davis and Edward Tracy.  Among the first to break ground for the Main Lodge were Irvin B. Perry, former County Farm Bureau Agent and Clark Muckey of Marathon.

1953 - The 4-H Rotary chick program was started in 1953. A local hatcheryman, George Parks gave the first 1000 chicks to start the program.  The First 4-H Leader's Recognition dinner and Agricultural department Round-up were combined in a 3-in-1 event.